The Litigant in Person: Kid gloves or gloves off? 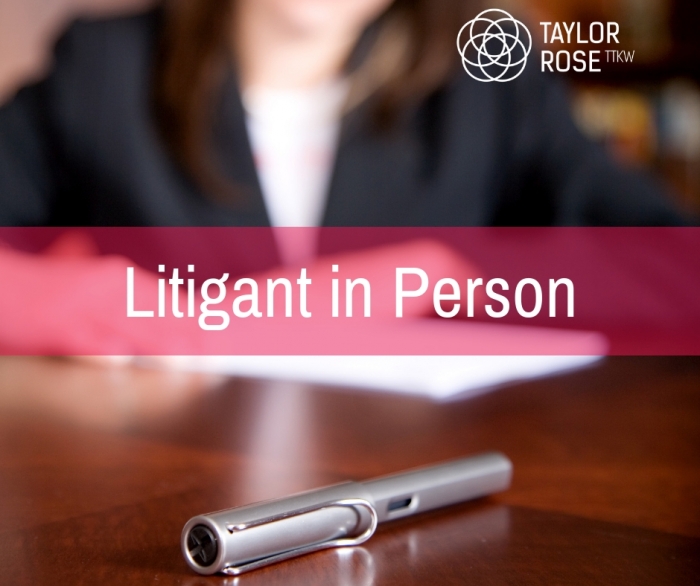 The litigant in person (‘LiP’) has long been the lawyer’s most frustratingly formidable opponent. Litigating against somebody who is emotionally invested and often fails to fully grasp the law or procedure can be an excruciating exercise in metaphorical head contact with the nearest wall.

Moreover, is it fair to take advantage of your opponent’s lack of knowledge? Do we owe a professional duty to the court and to the administration of justice to ensure that we do not take such an advantage? The Government’s recent and contentious “whiplash reforms” (Civil Liability Bill) have proposed an increase in the small claims track limit for personal injury claims from £1000.00 to £5000.00. In such a landscape, it could be commonplace to see the courts awash with LiPs as it becomes more and more unprofitable for lawyers to take on these claims. Accordingly, it seems inevitable that court processes will slow on the back of this additional strain on its resources.

In June 2015, the Law Society (recognising the increase in LiPs) released some practical guidance on how a lawyer should deal with a LiP. Within the guidance, the Law Society set out the professional and regulatory background highlighting that a lawyer’s paramount duty (pursuant to the Legal Services Act 2007 (s1(3)) is to the court and to the administration of justice. A lawyer’s duty to their client is secondary. Indeed, Chapter 11 of the SRA Handbook relates to conduct with third parties and states:-

This chapter is about ensuring you do not take unfair advantage of those you deal with and that you act in a manner which promotes the proper operation of the legal system’.

The guidance did, however, make clear that “knowing and using law and procedure effectively against your opponent because you have the skills to do so, whether that be against a qualified representative or LiP, is not taking ‘unfair advantage’ or a breach of any regulatory code.”

The remainder of the guidance focused on how a lawyer should communicate with a LiP (clear, jargon-free language); how a lawyer should prepare for a hearing (preparing a bundle where it might not otherwise fall on you); case management (potentially allowing for additional directions than would otherwise be expected) and drafting orders (perhaps presenting the LiP with template orders relevant to the particular case, at the outset). Overall, with the caveat of distinguishing genuine LiPs from vexatious litigants, the guidance appears to endorse a more understanding and patient approach from the lawyer to his/her LiP opponent.

But where does this leave the courts? In theory, a more understanding and patient approach to litigation should ensure better access to justice. Conversely, however, it will likely increase the length of a claim and the tractor-like driving of a LiP claim may well jam up ever more vital court traffic. A huge benefit of professional legal advice is often being told that a party has no real prospects of success and taking an early decision (based on objective advice) to discontinue. In a scenario where that advice is missing, meritless claims (which are not necessarily vexatious) will be allowed to travel much deeper into the litigation process, increasing hostility, wasting resources and further entrenching the parties.

In the recent Supreme Court case of Barton (Appellant) v Wright Hassall LLP (Respondent) [2018] UKSC 12, we have been provided with a current precedent as to how the courts should deal with a LiP. Wright Hassall had previously acted for Mr Barton in a professional negligence claim and had successfully secured a costs order against him for work completed before coming off record. Mr Barton sought to sue Wright Hassall for a breach of duty during the period they had been acting for him. As a LiP, he issued a claim form on 25 February 2015. Under rule 7.5 of the Civil Procedure Rules (‘CPR’), a claim form is valid for four months from the issue date and service must be effected within that period. On the final day before expiry of the issued claim form (24 June 2013), Mr Barton sent a copy of the claim form to the respondent’s solicitors by email. On 04 July 2013 the respondent’s solicitors wrote to Mr Barton stating that they had not granted permission to accept service by email and that the claim was now statute barred.

Mr Barton’s appeal ultimately failed in the Supreme Court by a slim majority of three to two. In the lead judgment from Lord Sumption, it was stated that; “unless the rules and practice directions are particularly inaccessible or obscure, it is reasonable to expect a LiP to familiarise himself with the rules which apply to any step he is about to take”. Although the LiP was described in the judgment as an “experienced litigator” and his attempt to serve at the eleventh hour did not endear him to the court, this case would appear to set a landmark precedent on the treatment of LiPs (arguably at odds with the 2015 guidance).

Turning to an even more recent decision involving a LiP (albeit in the High Court), judgment in Reynard v Fox [2018] EWHC 2141 (Ch) was approved on 08 August 2018.  In this decision, the court rejected an application for permission to bring a claim where it had previously been struck out.  In his judgment, HHJ Paul Matthews referred to the case of Barton in specific reference to how the court should treat a LiP. He reiterated that the Supreme Court “held that the fact that a litigant was acting in person was not in itself a reason to disapply procedural rules or orders or directions, or excuse non-compliance with them. The exception was that a special indulgence to a litigant in person might be justified where a rule was hard to find, difficult to understand, or it was ambiguous.” In Reynard, the judge went further and stated that “I see no reason why special indulgence needs to be given to him if he chooses to act in person. Accordingly, in principle, I apply the same rules to him as would apply to a represented party, such as the respondent.”

In the light of recent decisions (specifically the judgment in Barton v Wright Hassall LLP), it would seem the courts will no longer endorse any real degree of special treatment when it comes to a LiP. When once a LiP might have been afforded additional leeway in terms of compliance with rules or procedure, this will no longer be the case unless they can show the rule was hard to find, difficult to understand, or it was ambiguous (a seemingly high threshold).

With the introduction of the increase to the small claims track limit for personal injury claims looming large and the likely resulting increase of LiPs in our courts, are we on a crash course towards real inequality of footing between parties and access to justice failures?

Mark Quinn is a consultant solicitor with Taylor Rose TTKW specialising in personal and commercial dispute resolution. Should you wish to discuss any of the issues within this article or require his advice regarding litigant in person issues, do not hesitate to contact him on 01733 865 136 or mark.quinn@taylor-rose.co.uk

To bring or not to bring committal proceedings?

An Overview of Interlink Recruitment's Q&A with Adrian Jaggard

Taylor Rose MW has recently reached a headcount of over 1000 through a combination of our consultancy program, the...