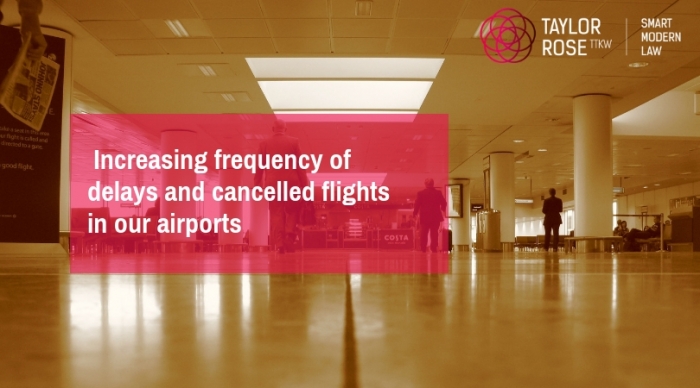 Flight delay compensation has seen a boom in recent years on the back of the EU Regulation No. 261/2004 (“EC261/2004”).  A simple google search can locate DIY letters of claim and basic advice as to how one goes about claiming compensation for cancelled flights or EU flights with a delay of at least 3 hours.  Compensation can range from EUR 250 to EUR 600 on any single flight and with the increasing frequency of delays and cancelled flights in our airports, the airlines are understandably concerned.

Generally, a claim will be successful if it can be shown the cancellation or delay was the fault of the operating air carrier (i.e. the airline).  The prescribed defence within EC261/2004 (whereby the airline might escape a claim for compensation) is where the delay/cancellation was “caused by extraordinary circumstances which could not have been avoided even if all reasonable measures had been taken”.

How extraordinary are the circumstances?

The telling question, therefore, is what constitutes “extraordinary circumstances”?  On its face and by the very literal definition of the word ‘extraordinary’, this is a high-threshold defence.  Indeed, it was the European legislators’ express intention to “provide a high level of protection for passengers”.  As such, one might expect any grey-area doubt to fall in favour of the passenger.

The term “extraordinary circumstances” was lifted from the Montreal Convention and within EC261/2004, an assistive, non-exhaustive list of possible circumstances is provided:

“Such circumstances may, in particular, occur in cases of political instability, meteorological conditions incompatible with the operation of the flight concerned, security risks, unexpected flight safety shortcomings and strikes that affect the operation of an operating air carrier”.

It is somewhat unsurprising the airlines tend to gratuitously cite “extraordinary circumstances” when confronted with inbound claims.  Many delays/cancellations might reasonably fall, at least to some degree, into the various factors of; technical issues; weather; security; flight safety and strikes.

It seems, however, the courts (as intended by the legislators) are finding in favour of the passenger where this defence is employed, in the absence of evidence of genuine extraordinariness.  In one instance, it has been ruled that lightning strikes do not fall within this concept of “extraordinary circumstances”, whilst the defence (quite surprisingly) will not apply in the case of an unexpected technical problem which is not attributable to poor maintenance and was not discovered during routine maintenance.

This takes us to the most contested and perhaps bitter issue concerning strikes.  Various news outlets have been running articles dating back to Autumn 2017 in respect of flight cancellations involving Ryanair (Europe’s most popular airline) due to industrial action from pilots and cabin crew.  Indeed, on 28 September 2018, BBC News reported mass strike action resulting in 250 cancelled flights across Europe, affecting 35,000 passengers.

Strikes that affect the operation of an airline are one of the examples listed in EC261/2004 as falling under the definition of “extraordinary circumstances”.  At first blush, this would indicate compensation claims for flight cancellations and delays caused by a strike should automatically fail.  It is, however, helpful to pause and rehearse the full defence definition: “caused by extraordinary circumstances which could not have been avoided even if all reasonable measures had been taken”.

Michael O’Leary (CEO of Ryanair) described the original flight cancellations caused by the first pilot strikes in 2017 as "a mess of our own making" as there were insufficient numbers of pilots to honour the schedule.  In such circumstances, there is clearly an argument the airline has failed to take all reasonable measures to avoid the delays/cancellations by their failure to have necessary staff cover in place.

Further, with the seemingly incessant repetition of these cancellations and delays, the salient question of whether “all reasonable measures had been taken” could again be levelled at Ryanair, who continue to accept passenger bookings on a vast level, despite the obvious backdrop of industrial action.

The Court of Justice of the European Union (“CJEU”) sought to clarify the strike issue by way of a ruling on 17 April 2018.  In the case of Helga Krüsemann and Others v TUIfly GmbH, the CJEU ruled that the spontaneous absence of a significant part of the flight crew staff (‘a wildcat strike’) was not covered by the concept of “extraordinary circumstances” within the meaning of EC261/2004.  This is widely recognised as a significant victory for passengers.  The CJEU, however, stressed the need to assess claims involving strikes on a case-by-case basis.

The Civil Aviation Authority (“CAA”) provided the below helpful response to the Ryanair strikes on 20 July 2018:

As one might imagine, the airlines continue to fight this issue ‘tooth and nail’.

Mark Quinn is a consultant solicitor with Taylor Rose TTKW specialising in civil litigation and dispute resolution.  Should you wish to discuss any of the issues within this article or require his advice, do not hesitate to contact him on 01733 865 136 or mark.quinn@taylor-rose.co.uk

Congratulations to Michaela Doyle who has won our Corporate Legal Star Award...