COVID-19: HMRC have presented a winding up petition against my company – has it now ‘gone away’? 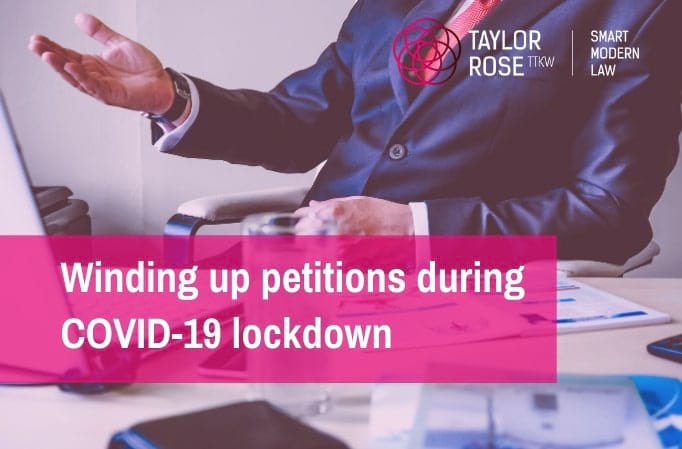 Richard Cole, Taylor Rose TTKW's expert insolvency solicitor, explains the recent change of approach by the courts to the presentation and hearing of winding up petitions and the option of applying to court for a validation order.

Richard Cole says that the direct answer to that question is no.

Due to the outbreak of COVID-19 the Petition may have been adjourned or the time until the same is listed for hearing is extended.

From 06 April 2020 to 01 October 2020 the practice and procedure surrounding the court hearing petitions has changed. This includes adjourning all petitions (other than those to be heard by a judge at the Rolls Building in London) currently listed to heard prior to 21 April 2020. The author of this blog had a petition presented by HMRC adjourned from March 2020 to July 2020. All petitions are now grouped and listed into time slots to be heard over video conferencing facilities. The court when it lists the hearings will provide links.

It would appear inevitable at least in the short term that there will be delays whilst winding up petitions are heard.

Q: Does that mean that you can trade on as usual whilst waiting for the petition to be dealt with by the court?

A: Again, the direct answer to that question is no as the effect of the following has not been postponed - see:

This section of the Act renders void any ‘disposition’ of property made by a company between the presentation of a winding up petition and the winding up order.

This is to protect the creditors of a company and to ensure that the assets of that company are distributed equally or ‘pari passu’.

Usually it may be the case that the company does not become aware that a petition has been presented until the petition is served or the company’s bank account is frozen by its bank. Any payments made by the company post presentation of the petition are (absent an order of the court) void and liable to recovery by any subsequently appointed liquidator.

Q: What can the company do to make payments now?

A: One of the options that the company has is to make an application to court for an order that the payments shall not be void in the event of a winding up order being made at the hearing of the petition (a validation order). In other words, to ensure that a person is not left to claim for the amount of the price pari passu with the other creditors of the company.

Q: What does the Company need to do?

A: The Court of Appeal set out the principles upon which the court will act in July 2016 in Express Electrical Distributors Ltd v Beavis [2016]. The circumstances are fairly typical in that a person supplies goods to a company at a time when, unbeknown to that person, a winding up petition has already been issued in relation to the company.

On 22 May 2013 a winding up petition was presented against the company. Payment in the sum of £30,000.00 was made to the creditor on 29 May 2013 absent knowledge of the petition rendering the payment void. The petition was advertised on 17 June 2013. A winding up order was subsequently made on 13 July 2013. Following a demand for repayment from the liquidators in December 2013 an application was made for a (retrospective) validation order in February 2014.

The court has discretion and will take into account:

In the case the Court of Appeal dismissed the appeal and the sum of £30,000.00 was returned to the company now in liquidation. The applicant was unable to show that the payment was of benefit to the general body of unsecured creditors.

Due to COVID-19 the way that the courts are dealing with winding up petitions should be kept under close review. They are (at the time of writing) proceeding, but that could change.

If the company is making payments that can be said to be of benefit to all of the unsecured creditors of the company, or it is solvent or there is some other special circumstance then a company can apply to court to validate the payments it intends to make / has made.

Whatever a company choses to do in these circumstances it must rapidly seek legal advice on the prospects of getting a validation order.

Richard Cole, is an expert insolvency solicitor based in the City of London and Hertfordshire. Richard is a full member of both the Insolvency Lawyers Association and the Association of Business Recovery Professionals. Richard has practiced in the field of insolvency law since 2001.