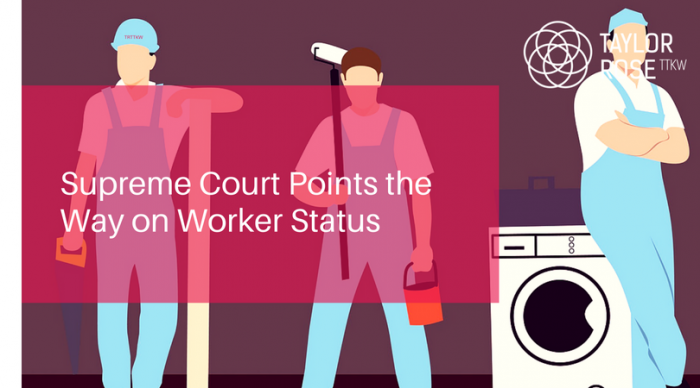 On 13 June 2018, the Supreme Court handed down its decision in the Pimlico Plumbers case. As the highest court in the land, barring an appeal to the European Court, the outcome is decisive. The outcome sheds some light on “worker” status, which appears to be somewhere between employment status, and the status of a completely unconnected party such as a genuinely self-employed consultant.

It’s an interesting distinction, because whilst workers do not have all of the rights that employees have, they do have the right to paid annual leave and the minimum wage (like employees). Self-employed people do not have those rights.

The Supreme Court appears to have decided, in a fact-sensitive Judgment, that a key indicator in deciding status is whether the person is required to perform services/work personally, or whether they can delegate the duties to another person.  If staff are required to carry out their duties themselves, without being able to send a substitute to do the work, they are not genuinely self-employed (think of a firm of builders that carry out work for customers – the customer does not care – and cannot require – certain members of the team to do specific jobs).  The fact that Mr Smith had to (personally) work minimum hours per week, and wear the company uniform, convinced the justices that the underlying true relationship between the parties was that Mr Smith was expected to do the jobs that were assigned to him personally and therefore he did benefit from worker status – and back pay representing the annual leave which Pimlico Plumbers should have paid him.

Luke Hutchings, Partner at Taylor Rose TTKW, says “whilst this decision is not unexpected, it does reaffirm the developing position on workers and the gig economy.  Where a business is expecting members of staff to supply services to clients personally without the ability to send a substitute (or where that entitlement is restricted), those staff members are unlikely to be genuinely self-employed. As workers, those staff are probably entitled to annual leave and other worker protections”

We are pleased to confirm that Taylor Rose MW is now welcoming walk-in clients at many of our nationwide offices.