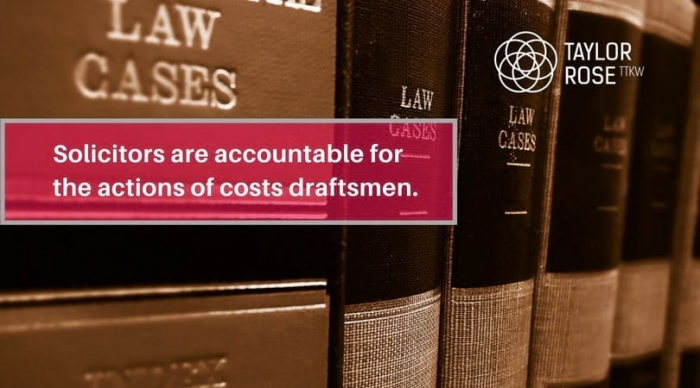 The Court of Appeal has handed down judgment in Bamrah v Gempride Ltd.

The assessment proceedings and appeal were handled initially on the defendant’s side by Stephen Hines, then a partner and now a consultant with Taylor Rose TTKW, and subsequently by Taylor Rose TTKW’s Matthew Hoe, Director of dispute resolution.

A detailed assessment arose out of a personal injury claim. In that assessment, the bill of costs was prepared by a costs draftsman and certified by the solicitor while claiming hourly rates in excess of those that had been agreed. The replies to the points of dispute asserted that BTE was not available, when in fact it was available had the claimant been willing to accept terms such as representation by a BTE panel solicitor.

At first instance, Master Leonard in the SCCO found there had been misconduct under CPR 44.11 in certifying the bill and replies and limited part of the claimant’s bill to the litigant in person rate – the claimant was also a solicitor who represented herself through her firm for a time during the claim. On the first appeal, His Honour Judge Mitchell reversed the decision for several reasons including that, in his view, the claimant’s costs draftsman was responsible and not the solicitor.

The Court of Appeal rejected Judge Mitchell’s conclusions. Hickinbottom and Davis LJJ held that the solicitor was responsible for the actions of the costs draftsman under the law of agency. They held that Judge Mitchell had misdirected himself that dishonesty had to proven against the solicitor and had failed to deal with the allegations of unreasonable and improper behaviour. Although bound by his finding of fact that the claimant’s solicitor was not dishonest, they concluded she had been reckless and held that there was unreasonable or improper behaviour. They applied a sanction of disallowing 50% of profit costs in the bill of costs for the damages claim.

The judgment firmly reasserts the solicitor’s responsibility for the detailed assessment process. Solicitors are accountable for the actions of costs draftsmen. It will mark the end of the ‘fast and loose’ lax approach in which everything can be ‘sorted out’ in negotiations. Instead, the bill and the replies to points of dispute will be taken more seriously and must be correct from the start – or risk sanction.

Courts will more readily apply CPR 44.11 in future with the benefit of this guidance from the Court of Appeal.

Claims for hourly rates or costs generally in breach of the indemnity principle should now not only be corrected – no more ‘nice try, mate’ – but penalised.

Opaque obfuscation in replies to points of dispute will now be more likely to lead to a sanction than a windfall.

Findings of dishonesty were not open to the Court of Appeal because of the findings of fact in the lower court stood. But another court in another case may well find similar behaviour dishonest.

Expect this case to be cited in very many detailed assessments going forward. Many solicitors may now be sweating about what bills and replies they have certified. Greater care at the outset should in the long term lead to fewer assessment hearings and more settlements.

If you’d like to discuss any points in this news article further. Please contact Matthew Hoe on 01733 865106 or email matthew.hoe@taylor-rose.co.uk

It’s that time of year again when our Q2 winners have been announced.  The Directors Awards are an annual...