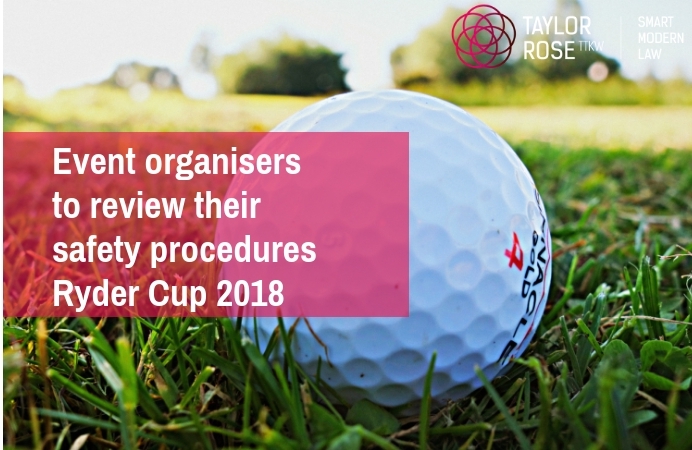 Greg Rollingson, an experienced personal injury lawyer and specialist in golf injury claims at Taylor Rose TTKW reviews the recent spectator injuries at the Ryder Cup in Paris and the Alfred Dunhill Links Championship (near St Andrews) and their wider legal implications.

Less than a week after a spectator (Corine Remande) lost the sight in one eye, after being hit by a wayward tee shot struck by Brooks Koepka at the Ryder Cup in Paris, another female spectator was injured by a tee shot at the Alfred Dunhill Links Championship at Kingsbarn Golf Course (near St. Andrews) on Thursday 4th October.

On this second occasion, the spectator was hit on the head by a ball struck by Europe Ryder Cup star Tyrrell Hatton at the 15th hole. The bleeding headwound was treated by paramedics on the course. The spectator was transported to the course medical centre. The spectator could be seen with a large gash to her forehead. It is unknown whether she will sue the event organiser (European Tour), the same organisers of the Ryder Cup.

These two incidents at golf tournaments are not isolated incidents. The numbers of such incidents appear to be increasing. In May 2018 Rory McIlroy struck a spectator at Wentworth with a wayward tee shot. In June 2018 Tiger Woods hit a spectator on the 2nd hole at Carnoustie in the Open, when playing out of the rough. That is 4 incidents in 5 months.

The increasing number of golf ball injuries at tournaments may require event organisers to review their safety procedures. The view in many golf club bars since the Ryder Cup incident, is that the event organiser can rely on the disclaimer on the entry ticket. The disclaimer provides that the spectators acknowledge the general risks associated with golf, including risks with errant shots. However, in English law The Unfair Contract Terms Act 1977 and The Consumer Rights Act 2015 prevent a party from excluding liability in a contract, for death or personal injury if caused by negligence. Therefore, if either of the two injured spectators can show negligence, they would be likely to succeed in a civil action against the organiser, if a law suit was brought in an English court.

At The Ryder Cup, the injured spectator Corine Remande alleges that the course officials did not give adequate warnings that a ball was coming towards her. If that is proved then the tournament organiser would be unlikely to avoid liability and the disclaimer on the entry ticket would not avail the event organisers.

The RA (the governing body for golf in the UK) has indicated that it is reviewing its spectator procedures and will assess its spectator advice before every event, whilst also planning viewing areas more carefully.

These incidents highlight the inherent dangers from golf ball injuries and have repercussions for all golfers, golf clubs and visitors generally to golf courses. If you are a golf club concerned about preventative safety issues, someone who has been injured by a golf ball, or you have injured someone else with a golf ball, Taylor Rose TTKW can help you. Please contact Greg Rollingson on 020 3590 0550 or by email greg.rollingson@taylor-rose.co.uk or David Webb on 020 3959 0550 or by email david.webb@taylor-rose.co.uk.