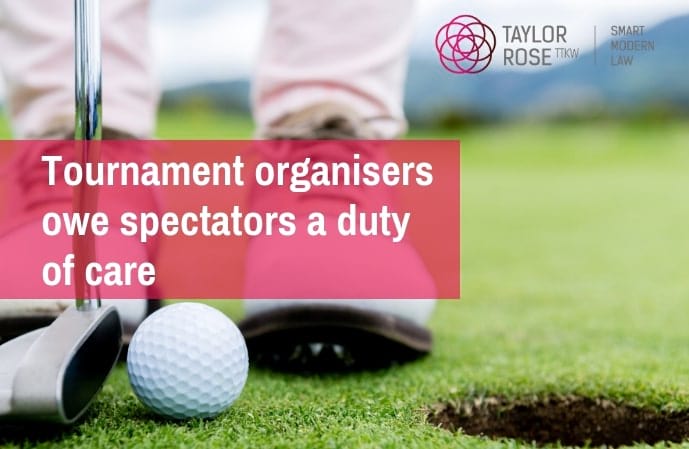 Greg Rollingson, an experienced personal injury lawyer and specialist in golf injury claims at Taylor Rose TTKW reviews the recent serious injuries to spectators at the Ryder Cup and the Alfred Dunhill Links Championship and their wider legal implications.  [Greg is also a regular club golfer himself].

On 29 September at the Ryder Cup in Paris, US golfer Brooks Koepka struck a golf ball that hit a spectator (Corine Remande).  As a result Remande appears (sadly) to have lost the sight in her right eye.  At the Alfred Dunhill Links Championship, at a course near St. Andrews on 4 October, another spectator was hit on the head by a ball struck by Europe Ryder Cup star, Tyrell Hatton.

Remande has indicated that she intends to sue the tournament organisers (European Tour).  One of her allegations is that course officials failed to give the crowd adequate warnings of the approaching golf ball. It is not yet clear, whether the spectator injured in Scotland is intending to take legal action.

In the UK, tournament organisers owe spectators a “duty of care” under the Occupier’s Liability Act 1957.  This duty is ‘a duty to take such care as in all the circumstances of the case, is reasonable to see that the visitor will be reasonably safe in using the premises, for the purposes for which he is invited or permitted by the occupier to be there.’  Breach of this duty of care is likely to bring about a finding of negligence in law.

In the light of the two recent incidents involving injury to spaectators,The R&A (the governing body for golf in the UK) has indicated that it is reviewing its spectator procedures and will set its spectator advice before every event, following the two incidents.

Tournament organisers and golf clubs generally, will now need to consider introducing some of the following measures which may  improve crowd safety.

It will be interesting to see what steps are now taken by tournament organisers and golf clubs, to address these issues.

The danger from injury from a golf ball is any event a serious matter that all golf clubs need to have under regular review, if they are to avoid legal liability at club level, regardless of what big tournament organisers do.

These recent incidents highlight for all golfers, golf clubs and visitors  to golf courses the risk of injury from golf balls which are potentially lethal projectiles. If you are a golf club concerned about preventative safety issues, someone who has been injured by a golf ball, or you have injured someone else with a golf ball, Taylor Rose TTKW can help you. Please contact Greg Rollingson or David Webb on 020 3959 0550 or by email to greg.rollingson@taylor-rose.co.uk or David Webb at  david.webb@taylor-rose.co.uk.

It’s that time of year again when our Q2 winners have been announced.  The Directors Awards are an annual...