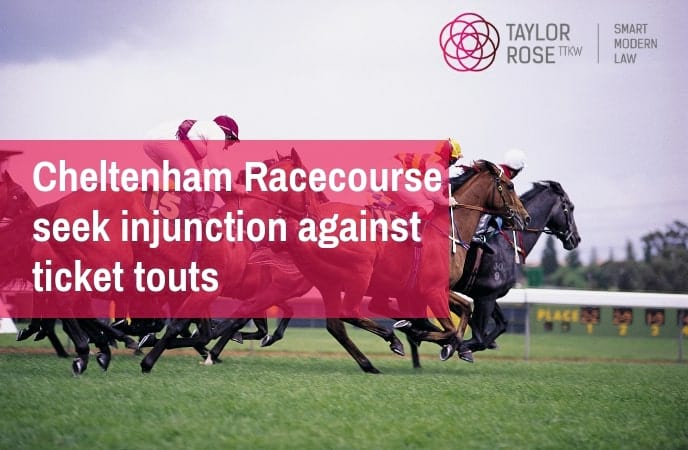 Greg Rollingson an experienced Litigation and Sports lawyer at Taylor Rose TTKW, reviews the application by Cheltenham Racecourse for an injunction in the High Court preventing tickets touts from attending the Cheltenham Festival.

Cheltenham Racecourse is applying to the High Court on 24th October 2018 to seek an injunction banning touts from Cheltenham Racecourse at next year’s Cheltenham Festival. If successful, the injunction could have a big impact on touting at other major sporting events e.g. Wimbledon, Six Nations Rugby, Grand National etc. Touting has become something of a scourge. The action taken by Cheltenham is part of a drive to clear up touting in British sporting events. Touting at football matches was made illegal by Parliament mainly to segregate rival fans. Many sporting events and genuine sporting fans suffer at the hands of touts.

Ian Renton, the Regional Director of Cheltenham said that “more than 150 touts operated at the festival in March. They used methods such as printing thousands of fake cardboard badges. Individuals also rummaged tickets from rubbish bins inside the course and resold them outside to unsuspecting customers. The customers were then refused entry, because the ticket had already been used.” Waste bins have been re-designed in the shape of letter boxes since.

Renton also said “touting has got increasingly worse every year. Our racegoers are getting hassled, sometimes pretty aggressively and fleeced. Some people are quite frightened by them.”

Last year Cheltenham Racecourse (working in association with Cheltenham Council) issued Public Space Protection Orders in the town and at the Racecourse to try and curb the activity of the touts. Fines set at £80, proved to be a wholly insufficient deterrent. Last year it is estimated that touting cost the Jockey Club (which has 15 Racecourses) over a million pounds in lost revenue.

If Cheltenham Racecourse obtain the injunction, it will take effect immediately, but will not be fully implemented before the festival in March 2019. If successful it could result in prison sentences of up to two years, for repeat offenders. Depending on the outcome of the injunction application, it is possible that other sporting events may follow suit and seek injunctive relief. Certainly, it is anticipated that the Jockey Club would seek similar injunctions to cover their other race events.

Ticket touts are well organised and operate on a large scale. In Cheltenham the touts are to be found on the road, inside the course and at the entrance/exit routes. Sports fans and sports organisers will watch the outcome of the litigation with considerable interest.

If you are a sports organisation or an individual with concerns about a sporting event, tickets touts or other related issues then Taylor Rose TTKW can help you.