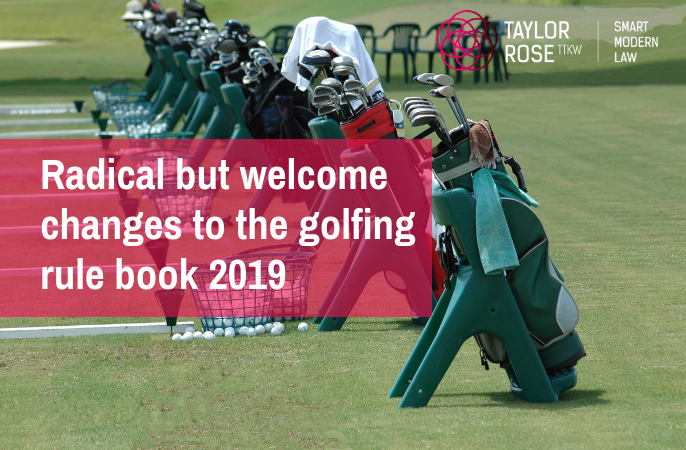 In the sporting world, 2018 comes to an end with Alastair Cook Knighted, for his tremendous service to cricket, Geraint Thomas receiving the Sports Personality of the Year Award for his fantastic achievements in cycling and Jose Mourinho sacked as Manager of Manchester United.

In the world of golf, new changes to the rules of golf come into force on 1st January 2019. The changes implemented by golf’s ruling bodies (The R&A and USGA) make some radical, but welcome changes. Intended to make the game faster and the rules themselves easier to understand, these changes are intended to update and modernise some very old rules.

The main changes are as follows:-

Some technical penalties have been removed and some complex situations simplified and modernised. Crucially though the important fundamentals remain intact. Ultimately golf remains a self-regulatory game. The root of the game is still based on the integrity and honesty of each individual golfer. But the rule book certainly now seems less intimidating.

The R&A has produced a simplified and useful fact sheet “20 Must Know Rules of Golf” for 2019. The writer (himself a club golfer) recommends Golfers get a copy of the “Players Edition” of the new Rules. Golfers can also download the App – “R&A - Rules of Golf”. It is also permissible now for golfers to consult the rules on a mobile device during competition without penalty. There may be separate rules on this for Tour Pros in major tournaments.

Overall the updating and modernisation of the rules are to be welcomed. It is hoped the changes will help speed up the game. Certainly, the new rules promise to be considerably easier to embrace in 2019, than the utter turmoil currently surrounding Brexit!

If you are a golf club concerned about preventative safety issues, someone who has suffered a golf related injury or you have injured someone else with a golf ball, or you have some other sport-related legal problem Taylor Rose TTKW can help you. Please contact Greg Rollingson or David Webb on 020 3959 0550.

Insurance law is rarely something that takes front and centre stage in the...

Following the most recent announcement made on the 4th January 2021, and with the nation once again in...