What is the difference between a Mutual and Mirror Will? 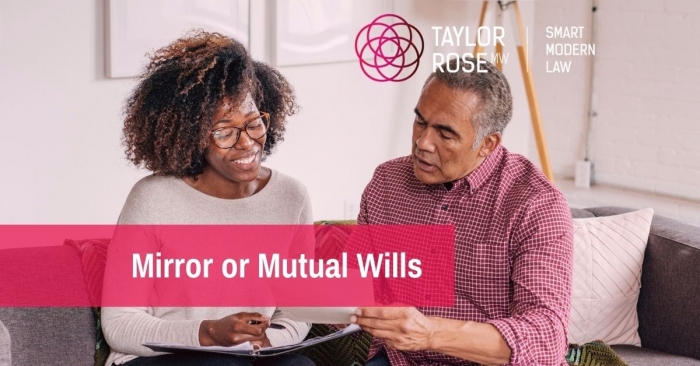 While you may have heard people refer to making a ‘Joint Will’ with their partner or spouse, these documents do not in fact exist in law. In law, a Will is a document that applies to only one person and although it is possible to include two Wills in a single document, it is not recommended or often done.

In most cases, the person heard will be referring to ‘Mirror Wills’ or to ‘Mutual Wills’.  Although both documents are Wills there is a significant difference between them.

Our Head of Estate & Trust Dispute Department and Solicitor, Sharon Bell and Solicitor, Peter Ellicott , explains what that difference is in the follow article.

What is a Mirror Will?

Mirror Wills are a popular option for partners and spouses. They are simple documents that allow couples to appoint the same executors and (in general) on death to pass their money and assets to each other and then, with the second death, to the children of the couple. In essence Mirror Wills are just that: they mirror each other. As such they are relatively easy to draft and so generally inexpensive.

Mirror Wills are fine when a couple is in complete agreement as to who will inherit their money and assets on the death of the second partner; however, they can cause problems in the family if one partner wants a sentimental item to go to one child when there are several children. Mirror Wills work best when the couple are in complete agreement as to who will receive their wealth after they die.

However, Mirror Wills can cause a problem if the surviving partner decides to change their Will after the death of the first partner or spouse and to leave their assets to someone different from what the couple had initially agreed. To avoid this couples sometimes make Mutual Wills instead. Mutual Wills (unlike Mirror Wills) cannot be changed so easily.

What is a Mutual Will?

When someone makes a Mutual Will they not only set-out their wishes in the usual way, but they also enter into a contractual agreement. The agreement is usually with their partner or spouse. Mutual Wills are usually used when one or both parties want to be sure who will inherit their money.

A Mutual Will can therefore provide two uses: the first being a Will and the second being a contract to ensure the right people will inherit your property. Theses Wills are very useful for couples who have children from a previous relationship.

For example, a divorced woman has two adult children from an earlier marriage. Part of her divorce settlement included a house free of mortgage and she wants her children to inherit that house. She decides to re-marry and her new husband has no assets, but he has an adult child. The couple make Mutual Wills whereby they agree to leave each other what they own but on the death of the second spouse the children of the woman will inherit the house.

With Mutual Wills, if the woman dies first, her surviving husband will take possession of the house for his lifetime but on his death, he must leave it to the woman’s children.

Enforcing a Mutual Will

To enforce the agreement the children of the woman must provide clear evidence of the agreement. They will have to show:

the Wills were made and

their mother and stepfather intended the Wills to reflect the agreement throughout their lives.

The evidence of the Mutual Will can be conclusively shown when the Will states it is a Mutual Will on its face.

In the absence of that clear evidence, you can still prove a couple intended their Wills to be Mutual if you can provide other evidence such as:

With regard to conduct, you may be able to show the Wills were intended to be Mutual and binding if you can show one partner allowed the other to use a particular asset (such as a house) as long as the other party kept their promise to pass that asset in accordance with the first party’s wishes.

If the surviving party wishes to change a Mutual Will after the death of the first partner or spouse, he or she can make an application to court to revoke the Mutual Will, but the Court will almost certainly impose a Mutual Wills Trust over the assets. The purpose of the court-imposed Trust is to ensure the assets are eventually inherited by the right people i.e. the children mentioned in the Mutual Will. What is more, the court-imposed Trust will override any future Will made by the surviving spouse.

The law does not specify how a Mutual Wills Trust operates. The law cannot do that (other than in general terms) because each case turns on it owns facts. Unfortunately, costly litigation and appeals thrive on uncertainty. While relatively few Mutual Wills are made each year, they are the subject of a disproportionately large number of legal cases.

It therefore makes sense to take legal advice when making your Will. If you wish to contractually bind a partner regarding your assets you would do well to take expert legal advice. This kind of advice will be in addition to the cost of making your Wills, but this additional cost will seem very reasonable if it means you will avoid spending tens of thousands of pounds trying to persuade a court that a Mirror Will was in fact intended to be a Mutual Will.

Please contact Peter Ellicott at our Sevenoaks office on 01732 445629  or email him directly by clicking the ‘contact us’ icon. Please click here to read more about the services our Wills, Trusts & Probate department offer.