Testamentary Freedom - How much do we have? 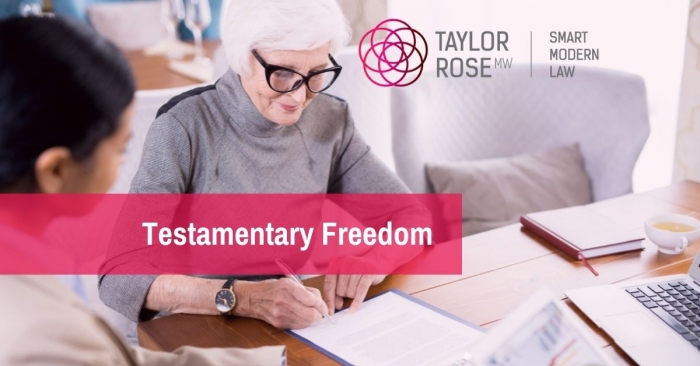 In England and Wales, we have what is called ‘Testamentary Freedom’ which as previously detailed, allows you to dispose of your assets on death to whoever you desire. This contrasts to numerous countries to which have forced heirship systems in place, in turn preventing discretion to be exercised.

However, there is a caveat to this freedom stated above which cannot be ignored. This caveat or albeit alteration was first introduced in 1938 (Inheritance Family Provision Act 1938) and was later refined by both case law and legislation (prior and post of the Act) now known as the Inheritance (Provision for Family and Dependants) Act 1975.

This legislation allows for certain people to make a claim on your estate if they believe that reasonable financial provisions are not made for them. The success of this claim would be at the discretion of the courts and there would be numerous factors such as:

which would be taken into consideration when deciding if reasonable financial provisions have in fact been provided or should have been provided.

As such, the determinative factor, this being ‘reasonable financial provisions’ is very much a subjective rather than an objective test. This means that each case would be determined on the individual facts of the case.

There are cases which are likely to have more success than others.  These are usually spousal claims which will be comparative with the Divorce crosscheck as to whether sufficient provision has been left for a spouse.

The Court will look at whether financial provision has been provided for the spouse had the relationship ended in divorce as opposed to death and the reasonableness of that provision. So, the starting position is 50% of the joint matrimonial assets. The Court can go up and down depending on all the circumstances of the case.

It is important to note that there has only been one reported case where a spousal claim for provision was not successful and this was because the widow was wealthy in her own right.

Other potential Claimants under the Act will be entitled to bring a claim based on maintenance and it is for them to prove this.

The following can make a claim on a deceased estate:

The Court will consider each case on its individual facts.

In the leading Adult Child case the Supreme Court said that £50k was sufficient, a life interest in a property was sufficient, a purchase of the Claimant’s council house was sufficient but equally nothing was sufficient reiterating that the decision is up to the judge hearing the case at trial to determine and the above-mentioned orders were all decisions that a Court hearing the facts of this particular case could have made.

You will therefore note the risk and the wide discretion that the Court has.

There are no guarantees in this type of litigation which can be expensive, and we would suggest that you take legal advice as to your individual circumstances and whether you have a meritorious claim against the Estate.

Most cases are settled at mediation given the cost risks to both parties.

It must be noted that there is a time limit to this claim (except if permission is granted from the court) which is six months from the date in which representation with respect to the estate of the deceased is first taken out, which generally means six months from obtaining probate.

Ellie Jaggard and Sharon Bell are Solicitors within our Wills, Trusts & Probate department. If you are looking for further information regarding Contentious probate please click the 'contact us' button to contact Sharon directly. Please click here to read more about our Wills, Trusts and Probate services