What is the importance of your Final Will and Testament? 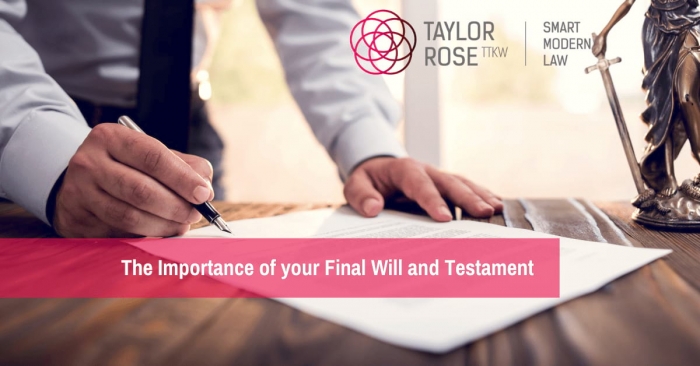 Dealing with the death of a loved one is challenging in various ways for different people. There is no right way to grieve or deal with death and there will likely be many factors mixed in with your sense of loss.

As well as dealing with your emotions, there will be other things to consider, such as obtaining a death certificate, funeral arrangements and sorting out the Will.

It is important that you have a Will in place; during the first lockdown, it was reported that there has been a 76% increase in requests to make a Will.

The majority of those who are requesting Will writing services are the elderly and vulnerable. In particular, those that receive hospital or other health care treatment and want to 'put their affairs in order'.

In a time of self-isolation and the country effectively in lockdown, technology is now becoming a Will writers' best friend. However, concerns have been raised with regards to the haste in which these Wills are being constructed, and the fact it could lead to disputes further down the line.

Both handwritten and typed Wills can be valid, but there are certain requirements for a handwritten Will that need to be reached.

If you are looking at making your own Will, you need to ensure that it is valid and that it meets the legal requirements. These include:

If your Will reaches these requirements then it should stop the document becoming void.

It is essential that you take proper legal advice before making your Will and ensure it is kept in a safe place and that someone knows where to find it.

Intestacy rules have recently changed, as of Thursday 6th February 2020, a spouse or civil partner will be entitled to the first £270,000 of their deceased partner's estate. This has seen an increase of £20,000.

The only way to guarantee that an estate is passed to the deceased's chosen recipient is to ensure that a Will has been made.

Examples of issues that you may find in your Will:

After Prince's unexpected death in 2016, his siblings stated that the singer did not have a legitimate Will in place.

This meaning that his multi-million-pound estate has been involved in a lengthy legal battle, but it is believed by family members that a valid Will exists somewhere in Toronto where Prince lived for a time.

Prince's case, in the last four years, has become more complicated since his half-brother, Alfred Jackson passed away. Alfred was one of the key heirs to Prince's estate. Legal disputes are still ongoing.

When Patrick Swayze died in 2009, it was reported that some of his family members, including his Mother and Siblings, assumed that his Will was illegitimate as it was changed while he was hospitalised, two months before the popular actor passed. His Will left everything to his widow and nothing to his mother or siblings.

Even though some family members disagreed with the Will with allegations of forgery and incompetency. The Will is still valid due to no lawsuit ever being filed because it has now been more than five years since the star passed, a court case is very unlikely.

When Fast & Furious actor Paul Walker died from a car crash, his estate was opened in probate court by his Father where they found a Will, trust and about $25 million in assets.

Unfortunately, Walker's Will was dated in 2001, when he would have been 28 he hadn't kept his legal documents up to date.

Walker passed away at 40 which meant important life events would have happened, this could have included, for example:

So even though Paul Walker shows that no one is ever too young to start their estate planning, he does prove that the documents do need keeping up to date.

Many people have various requests once they have passed which can also be documented in your Will.

Star Trek creator, Gene Roddenberry requested that his ashes be scattered in space. His request was granted, and his ashes were successfully released via a satellite orbiting earth in 1997.

If you are looking to create, update or see a problem with your Will, Trust or Estate- Planning documents it is best to seek proper legal advice, not only for yourself but to make it easier on your family.

We all have various wishes and it is understandable not fully knowing or being fearful of what will happen when we are gone this has been highlighted by ongoing events cause by Coronavirus which has made people think about making their final wishes.

Please contact Sandy Kaur at our Peterborough office on 01733 865625 or click the 'contact us' button to email her directly. Click here to read more about our Wills, trusts and estate planning and probate service.

Congratulations to Michelle Stephen who has won our Corporate Director Award...

What is Collaborative Law, Mediation & Arbitration?

We firmly believe that, wherever possible, you should be the one to decide how your money should be divided with