How can the court interpret an ambiguous or defective will? 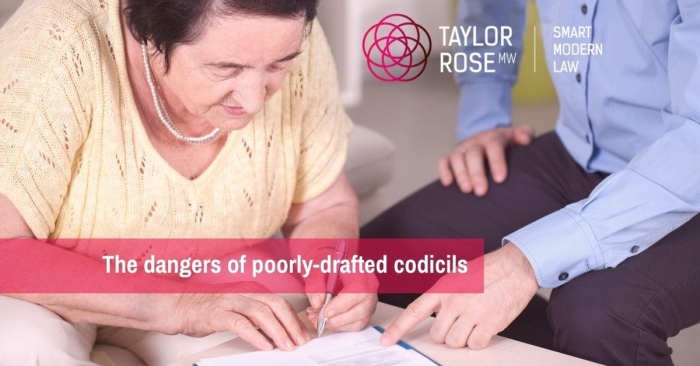 Your Will is probably the most important document that you will ever put your name to. Therefore, it is crucial that it is drafted in a way that carries out your wishes effectively.

A codicil is a document that can be used to make relatively minor amendments to a Will, such as changing the executors or a couple of the beneficiaries. However, codicils can cause more problems than they solve if they are not drafted to dovetail with the original Will. In many cases, it is much safer to make a new Will rather than amending an existing one.

Eddie Bell, Solicitor in our Wills, Trusts and Probate department discusses the case of Barrett v Hammond [2020] EWHC 3585 (Ch). The case demonstrates the problems that can arise when an already complex Will is amended by a Codicil rather than replaced with a completely fresh Will.

What was the background?

The case dealt with the estate of Dr Robert Munroe Black, and how to interpret his Will dated 29 September 1998 and Codicil dated 2 August 2005. Both were prepared by solicitors.

Dr Black was a leading research chemist who had published a number of scientific papers. He did not have particularly close ties to his own family and in fact was much closer with his wife’s family. He died in 2018 and his Will appointed the claimant as his executor.

In the first instance, the Will left everything to Mrs Black if she survived him, but she had died in 2013. The Will provided that in this case, there were some pecuniary legacies and then the residue was divided into 52 equal parts. These were divided between six members of Mrs Black’s family (who each received 6 parts of the estate) and eight charities (who each received 2 parts).

So far, so good; however, the Codicil removed two of the family members and added two charity beneficiaries (each of whom was given two parts). This meant that two lots of six parts had been removed but these were only replaced with two lots of two parts. The number of parts, therefore, was now 44, not 52.

Because of the way the Codicil was drafted, the Will was still read as dividing the estate into 52 parts, even though it only went on to list what should happen to 44 of them.

What should happen to the other 8 parts?

At first glance, it appeared that there was a partial intestacy, so they should go under the intestacy rules to members of Dr Black’s family.

What is the law?

Rectification is a way of correcting an error in a Will so that it has effect in the way that the testator intended it to have.

Under section 20 of the Administration of Justice Act 1982, the court may order rectification where a will does not carry out the testator’s intentions because of either:

The court can be quite generous in its definition of ‘clerical error’. In fact, in the leading case of Marley v Rawlings [2014] UKSC 2, the Supreme Court held that this included a married couple signing each other’s Will by mistake.

What did the court decide?

The court ordered the will to be rectified on the basis that the drafter of the codicil had made a clerical error.

The judge held that Dr Black was highly intelligent and had given a lot of thought to how he wanted his estate to be divided. It was therefore very unlikely that he meant to have a partial intestacy of 8/52 of the residue.

To support this view, there was a document from 1998 which summarised the terms of the Will. This contained a line saying that the remainder of the estate would be divided into 50. The number 50 was crossed out and replaced by 52, showing that care had been taken to make all the numbers add up.

If Dr Black had meant for there to be a partial intestacy, this part of his estate would have gone to family members of his with whom he was not close. It was therefore very unlikely that he wanted them to benefit anyway.

The judge also believed that the solicitor who drew up the codicil had not read the Will in detail. Not only was there the issue of the numbers not adding up, but the codicil also included a provision for what would happen if one of the charities no longer existed at the date of his death. A similar provision was also in the Will.

The solicitor’s mistake was described as ‘just a clerical oversight, a failure to balance the figures’, so the court did have the power to rectify the Will and Codicil. The Will was rectified by changing ’52 parts’ to read ’44 parts’. This meant that the entire residue passed to the beneficiaries specified in the Will and Codicil, with none going on a partial intestacy.

The judge ordered the costs of the application to come out of the estate.

What can we learn from this?

Most obviously, the case shows that the court has a wide latitude to correct the terms of a defective Will. It is welcome that the court agreed to rectify it, and avoid the problems that can arise on intestacy in having to identify the beneficiaries. The fact that the costs came out of the estate shows that the executor acted reasonably by bringing the claim.

That said, the need to go to court could have been avoided completely if the codicil had been drafted properly to begin with. It would have been much neater if they had in fact drafted a whole new Will rather than just a codicil, as this would have been more likely to make the drafter add up the parts of the estate correctly. The court application would have caused the size of the estate to dwindle, reducing the amount available for beneficiaries.

Ultimately, this case shows how crucial it is for a Will to be drafted correctly, to reduce the chances as far as possible of disputes like this happening in the future. Of course, in this situation the key witness (the testator) has already died and so cannot give evidence themselves about what they wanted their Will to do.

How can we help?

At Taylor Rose MW, we have an experienced team of solicitors who specialise in advising on Wills and estate planning. We have the expertise to draft a Will that is tailor-made to your wishes, whether simple or complex, and that carries them out effectively.

ave a large Contentious Probate department who deal with disputes over Wills and inheritance, and who are well-placed to bring rectification claims like this if required.

If you would like to make a Will with us, call us on 020 3540 4444, contact us to request a call back or click the 'contact us' icon to send us an email and one of our specialist team will be happy to discuss your wishes with you.